Get gentle reminders by text to reach out to friends while social distancing.

It took me about 3 days to arrive at the feature complete version as it is now. At that point it looked like this though: 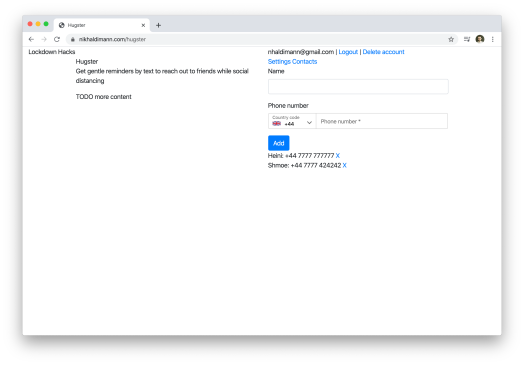 All the interactivity was in place and the UI elements were roughly lined up where I wanted them but I hadn’t spent any time on styling or visual considerations. I spent almost another full day just on UI/UX polishing. I know I said I wouldn’t mind unpolished outcomes but in this case I really felt the impact of decent design would be significant.

I can’t overstate how much BootstrapVue helped with the UX, even when I hadn’t ever used it before. It accounts for the somewhat cookie cutter look & feel but in earlier times it would have taken me days to recreate its prefab components (tab navigation, form input, modals etc.) with similar fidelity.

The biggest caveat from a product point of view is that you have to enter your contacts manually. It’s an obvious feature to import contacts from Google as users are already authenticated against it. Implementing that and dealing with Google’s restrictions around it would be another multi-day project though.

Arguably this should be a mobile app which can tightly integrate with the contact data on users’ phone and use native push notifications rather than texts. I ruled that out for practical reasons: I estimate it would take me more than a week of scrambling to learn React Native while putting a mobile app together and then I would still be faced with Apple’s app store barriers, delaying an iOS launch even further. Mobile platforms are not great for rapid prototyping, especially if, like me, you haven’t built a mobile app in years.

Twilio handles all the sending of text messages. I’m only using a single API call of theirs – sending a text message – so it should be easy, but their sign up flow and developer experience was slicker than I expected. Total time spent on the Twilio integration was probably less than 1 hour.

I’ve known this for a long time but the point was definitely driven home: Frontend development is a lot more time consuming than backend development for something like this where scalability on the backend is not a concern. I would say the split of my time was about 70% frontend, 30% backend.

This UI is about as simple as it can get but the number of states that the UI needs to account for is still kinda too high to hold in my head at once. This means countless loops of manual testing and a lot of code for what looks trivial on the surface.

I don’t think this is any fault of the tooling (the Vue.js developer experience has been very nice), it’s a systemic issue with UI development. Effort doesn’t scale linearly as you ramp up the interactivity (reactivity?) of the UI, it’s more like quadratic. I think people, including me, often underestimate the effort required to build a modern web frontend because that ramp has been steep lately – what’s technically possible and what users expect has evolved so rapidly.